Please don’t misunderstand the headline of this post. I’m not going to ponder the authenticity of Rick’s dead, stuffed bigfoot. It’s surely as fake as Ryan Seacrest’s smile. In this case, all reasonable people can agree that pictures don’t lie. 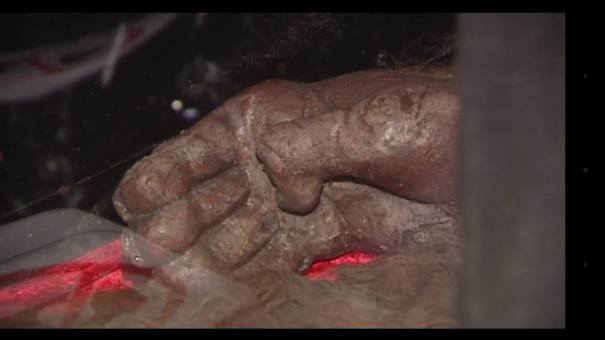 On the plus side, hands like this would make Hank an excellent swimmer.

Not even Breathe Right strips are going to help this dude.

But. Is Dyer a hoaxer? Depends. Was P. T. Barnum a hoaxer? Was the guy who got me to pay 25¢ to see the HUNDRED POUND RAT at the LA County Fair when I was a kid a hoaxer? Was Frank Hansen of Minnesota Iceman fame a hoaxer?

We have a tradition of showman in our culture. Guys who make extraordinary claims in unlikely places and charge money for people to see their oddities. In my personal opinion, Dyer is one of these more than he’s someone like Ivan Marx. Only the very stupid or gullible would think (even wishfully) that Hank is the real deal.

Is Dyer guilty of fraud? Harder to say. I’m not a lawyer and I haven’t stayed in a Holiday Inn Express in more than a year, so I don’t really know. I doubt his traveling exhibit would qualify as fraud. The money he took on his website prior to that, though, might.

The problem with the community of sasquatch enthusiasts right now isn’t Dyer and Hank. It’s that they take him so seriously. It’s that they give him so much attention. What we need to do now is make one last post. One last Facebook update or tweet. Say to the world that Dyer is a wannabe Barnum and we know it and he’ll end up as important to the world of bigfoot research as Hansen was. A speed bump.

In other words, treat him like the joke he’s knowingly pulling on us. Then let him go.