What would Yosemite Sam do? 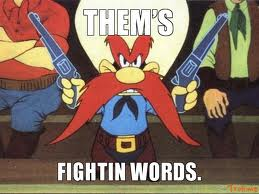 Back on BFS 55, my guest Sharon Hill said a few things that, at the time, I recognized as the kinds of comments one often hears as reasons the incredulous doubt the existence of the North American Wood Ape. My reasons for having Sharon on weren’t to have a public debate about the creature’s reality (neither of us were interested in that), but I knew when we were talking that at some point this post was going to happen. No self-respecting bigfoot blogger/podcaster/right-handed Virgo could let it slide by without some level of response.

To be clear, this isn’t meant to be a shot over her bow or anything. I’m not looking for a fight (Yosemite Sam graphic to the contrary). I’m only giving the proper responses to the issues she brought up as would anyone looking to further a reasoned conversation towards the resolution of a problem.

So, what I’m looking at right now is, what is the evidence for this subject X, let’s say? And your idea of evidence might be the tremendous body of stories and the various eyewitness experiences that people have had, the few bits of physical evidence, the sounds and tracks and things like that. And my idea of evidence, when I look at that body of evidence, it’s pretty weak to me.

Stick a pin in the “body of stories” for a moment. I’ll come back to that.

I’m perfectly comfortable with skeptics dismissing sounds. To the best of my knowledge, no purported bigfoot sounds have ever been recorded while someone observed the bigfoot making them. All the sounds we believe to be attributed to bigfoot are not known to be from the animal. We have strong circumstantial reasons to think that the Ohio Howl, for example, is a wood ape vocalization, but as I said, I don’t know of any observations of one making the noise.

I’m also OK with the dismissal of hair, even though there are a number of them that have been collected that are not from any known animal. They share many attributes and are found in conjunction with other purported bigfoot activity, but lots of animals have hair and (at least so far…I’m looking at you, Sykes) none of the hairs produced have been shown through DNA analysis to originate from anything other than known creatures (even if the known creature is, nonetheless, quite surprising). 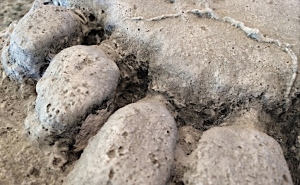 Detail of the cast of the left footprint of a purported bigfoot, made by Sheriff Dennis Hereford on April 22, 1982 near Grays Harbor, WA.

Where I will draw a bright line is around tracks. Tracks are quite commonly used to study the activity of animals and can be compelling physical evidence of an animal’s presence. I think the incredulous don’t often have a thorough understanding of the size and scope of the track record we have so far.

While this post isn’t meant to be an in-depth defense of the track record, I’d draw attention in particular to the “Hereford Cast” as an exceptional example. I expect that the incredulous are influenced in their perspectives by the fact that tracks are often and easily faked, but there are several examples like the Hereford Cast that can’t easily be explained away as a carved wooden foot strapped to a boot. This was a track that showed an apparent organic interaction with the substrate into which it was pressed. The mud flowed around the toes as they depressed and the impressions left are wider at the bottom than they are at the top. This is entirely consistent with how a real toe with a fatty pad surrounding a bone would look in a track made under the same conditions as Hereford’s.

Of course, how one determines the relative weight of this kind of evidence is personal and subjective. I would hope that an objective judge would consider the entire body of track evidence before dismissing it all as weak.

Sharon went on to say:

Science doesn’t really work at all with anecdotes. Anecdotes can guide you in a direction to look, but on their own, they’re pretty useless because they’re subjective and we can’t reproduce them. And science is all about universalism, that anybody could collect this data and it should come out the same. We don’t see that for bigfoot claims.

Anecdotes are evidence. They’re a form of observation. They’re difficult to control for, I admit, because different people will be able to recollect different things and some people will conflate their feelings about bigfoot with a sighting of something mundane like a bear, but even the most conservative paring of the encounter record still leaves valuable data.

For example, recently a PhD candidate in geology and sasquatch skeptic named Josh Stevens mapped the BFRO database of 3,313 encounters. 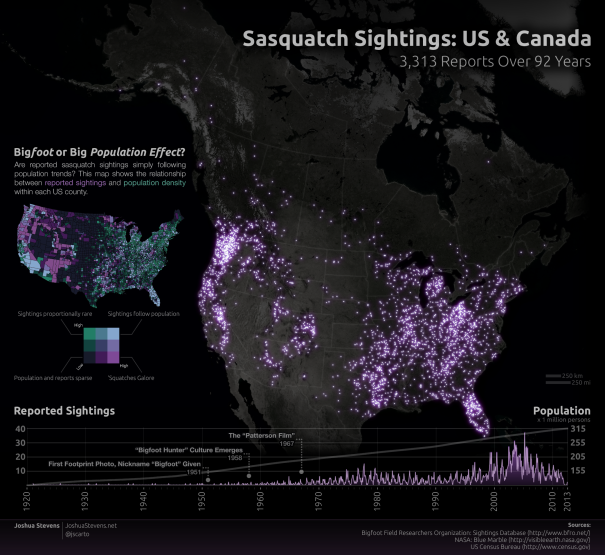 Right away you can see that sightings are not evenly distributed. At first glance, it looks a lot like a map of population distribution. After all, you would expect sightings to be the most frequent in areas where there are a lot of people. But a bivariate view of the data shows a very different story. There are distinct regions where sightings are incredibly common, despite a very sparse population. On the other hand, in some of the most densely populated areas sasquatch sightings are exceedingly rare.

I’m not thrilled that he used the BFRO database in that I’m not confident that all the reports were investigated and vetted using consistent levels of inquiry and skepticism. However, as directional data, it’s compelling. Bigfoot are not seen where people are. This is not the first time a correlation between something other than population density has been observed with regard to the encounter record.

The North American Wood Ape Conservancy picked up on an observation first made by John Green in Apes Among Us. Reports of bigfoot encounters have an interesting habit of following rainfall patterns, waterways, and certain types of habitat. 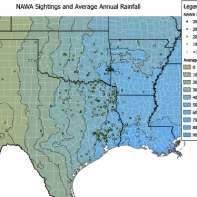 Population density of Texas based on 2000 Census figures

People more often report seeing wood apes where there’s more rainfall and forest cover than they do where there isn’t. And the number of people present, based on population density figures, does not correlate with the locations of sightings. Just what you’d expect from an animal.

Other looks into the encounter and track records produce more interesting natural correlations. Dr. Henner Fahrenbach, in 1998, published a study on measurements and estimates of dimensions regarding wood apes. His findings are well known among enthusiasts and demonstrate, among other things, natural distributions of foot metrics. 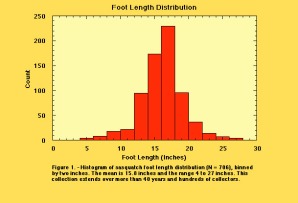 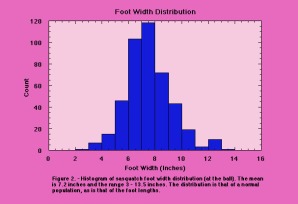 The data from encounter reports and track castings strongly suggests an apparently natural common source. The dataset is not perfect, no. But it’s the data we have and the direction it points is fairly apparent. If the stories were all either made up, hallucinations, or the result of hoaxing, would they demonstrate natural distribution? If all the footprints were similarly misidentified bear tracks or wooden strap-ons, would they do the same? It may be impossible to say, but the reality is they do look natural and that’s not insignificant.

And then, we can look at all these other lines of evidence that feed in to thinking about this subject, and that would be the population studies. Does it make sense that there’s only a couple of these? And that all of a sudden, when they were first only ever found in the Northwest, all of a sudden now they’re found all the way to Florida, and, you know, and Pennsylvania

While estimates of population size vary widely, nobody in the field is suggesting there are “only a couple” of them. The assumption is, for these to be real animals, in at least some pockets there are breeding populations. That’s the only explanation for how an animal could be repeatedly encountered over many decades. One of the main drivers of the NAWAC is the concern that their populations might be in serious trouble. But without concerted study on a scale no current group is attempting or capable of achieving, there’s really no way to know for sure.

Additionally, it’s a common misperception that bigfoot were only ever found in the Pacific Northwest. It’s just not true. There are many historical accounts of encounters with bigfoot-like animals from all over the country. They’ve been appearing in the media for as long as there has been media. As I said on the show, in the areas in which the NAWAC has traditionally operated (Texas, Oklahoma, Louisiana, and Arkansas), stories of wild hairy men in the woods are quite prevalent and have been from well before the activities of the 50’s and 60’s around Bluff Creek, CA, brought the idea of “Bigfoot” before a world stage.

So, the evidence just starts to just not look very strong. And so what I’m looking at is the various lines of evidence — paleontologically, geographically, ecologically — things don’t add up for me.

I’m sure Sharon’s aware of the Gigantopithecus hypothesis (sounds like, but is not, an episode of The Big Bang Theory). Giganto lived in Southeast Asia and could have crossed to North America when the Beringian land bridge connected the two continents, just as the Red Panda is now known to have. There’s currently no way to tell if wood apes are descendants of giganto, but it’s a known animal in the paleontological record that could have moved from one part of the world to another via a known geographic feature we know other animals (like, perhaps, man) used.

In conclusion, I’m not suggesting that any of what I’ve presented here rises to the level of proof that wood apes exist or that Sharon’s positions are invalid or anything like that. There are reasons reasonable people (even those who have never had a personal experience) would come to the conclusion that these animals might be real. There seems to be ample evidence suggesting a more significant exploration of the subject should be undertaken, not by groups of amateur weekend naturalists, but by trained biologists.

You don’t need to be a reasonable person to get into a fight over this kind of thing, but only reasonable people can be part of answering the question posed by the evidence or, at least, responding to the evidence in some coherent way.

Many thanks to Alton Higgins who, while I was formulating this post, was doing the same and pulled together some of the supporting data found within it.

64 comments on “What would Yosemite Sam do?”