I don’t recall ever having heard of the TV show Making Monsters so I obviously didn’t know they tried to tackle the Patterson-Gimlin figure. And by “tackle” I mean “show to be fake” since the star of the show, effects maker Ed Edmunds, says, “I’ve been wanting to debunk this bigfoot thing forever.”

The set-up is this: Our old friend Phillip Morris apparently goes around and tells people what a load a hokum the PGF is based on how he made the costume and all. In order to make his little talk more effective, he reached out to Edmunds to make him a “state of the art” bigfoot suit. Think about that for a second. This is the guy who made the original. In 1967. But to help demonstrate how the PGF figure is a dude in a suit, he turns to a professional costume and effects manufacturer to make him one using 21st century technology and techniques. OK. This thing is, I bet, going to be pretty awesome.

Here’s the PGF-related segment from the show:

Pretty cool costume. Too bad it looks absolutely nothing like the PGF figure. Hell, it’s not even half as good as the Jack’s Links sasquatch. Also, note the size of the head on the thing and consider that in the context of what Bill Munns told us on BFS 50: The head has to be huge in Edmunds’ suit to fit the head of an actor. The head of the PGF figure is freakishly small.

Here’s some screen caps showing the suit in action. 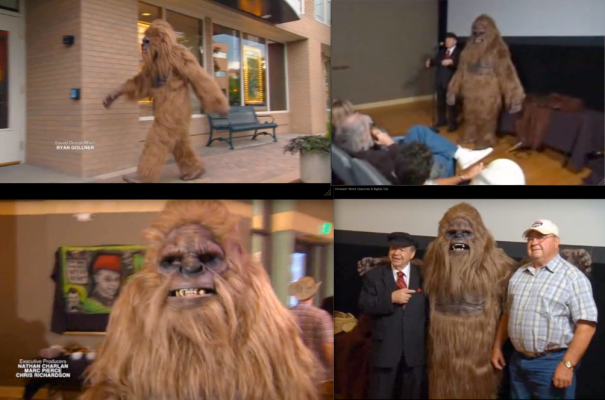 You can also see all the typical props Morris drags around (including Bob Heironimus) like a monkey mask, football shoulder pads, and what might be a big rubber foot. What I’d rather see Morris do is assemble these bits and pieces into a suit that even passingly resembles the PGF figure. I’m not even talking about replicating the realistic ways the skin and musculature in the movie moves and folds. I’d just like to see Morris, Edmunds, or anyone make a suit that just looks like Patty.

That fact that they can’t — Morris or any other professional — but apparently an out of work miniature stagecoach craftsman like Patterson could speaks volumes and is much more revealing than the neat-yet-totally unbelievable product shown on Making Monsters.